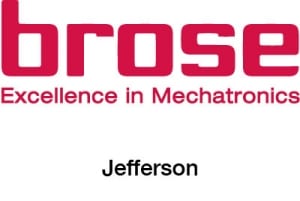 Brose Jefferson is a subsidiary of the Brose Group, the world’s fourth largest family-owned automotive supplier. Brose has been a committed partner to the North American market since 1993. The mechatronic specialist now counts 12 locations across Canada, the United States and Mexico and employs approximately 6,000 people in the region. The entire range of Brose products is manufactured throughout the North American facilities, from window regulator and door modules to seat systems. Brose Jefferson supplies doors and latch modules to several large automotive manufacturers such as Ford and FCA. Brose Jefferson is a Ford Q1 certified facility and was awarded as a Best & Brightest Company To Work For winner in 2019. Established in 2008 in Warren, MI, the manufacturing facility counts approximately 335 employees.