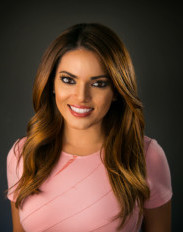 Kalyna Astrinos joined the 10News Morning Team in January 2017. As a California native who’s lived up and down the state, she’s excited to call San Diego home!

Before joining 10News, Kalyna was the Morning Show Reporter & Fill-in Anchor at KBAK/KBFX, the CBS and FOX affiliates in Bakersfield, Calif. During her time there, she covered several major breaking news events, like the devastating Erskine Fire in Lake Isabella, the death of officer David Nelson, record flooding, stand-offs and more.

After earning a degree in Psychology & Social Behavior from UC Irvine, Kalyna made Southern California her home base for a large portion of her career. She was a radio traffic reporter on a number of iHeart Radio stations, including fill-ins for On-air with Ryan Seacrest, as well as Afternoon Traffic Anchor at ABC7 in Los Angeles.