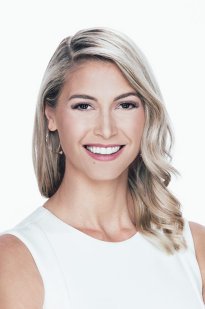 Tabitha Lipkin is the weekend sports anchor and reporter. She hails from the land of cowboys and crazy delicious breakfast tacos, graduating from the University of Texas in 2012 (Hook ’em!).

Since then, Tabitha has worked in all corners of broadcast. She started her career behind the scenes working in late night television for both “Conan on TBS” and “The Colbert Report.” She then transitioned into a more “in-front-of-the-camera” role.

Some of the highlights of her career include working for FOX Sports San Diego and creating unique content for their “SD Live” and “Keepin’ Tabs” shows, winning Miss Scuba International 2014, anchoring nationally for OAN, winning an Emmy for her travel show “Private Islands” and doing weather-features-sports for the former CW6 station in San Diego (may that old dinosaur rest in peace).